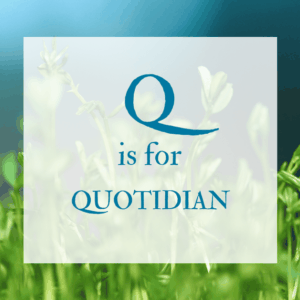 In Spiritual Growth, Q is for Quotidian Mysteries

1. of or occurring every day; daily.
2. ordinary or everyday, especially when mundane.

1.  the condition or quality of being secret, strange, or difficult to explain.
2.  a religious belief based on divine revelation, especially one regarded as beyond human understanding.

I love these two concepts together; ordinary and secret. And the idea of being altogether too “difficult to explain.”

This issue came up in a spiritual direction session just this week. I was asked, “As Christians, shouldn’t we stand out, do something important, be remarkable? Most of my days, are filled with the ordinary and mundane tasks that everyone fulfills. But I can’t leave my job and my family to serve those in need.”

I admit it, I’ve felt this way too. I remember the first hint. I had just left the corporate world, to begin a life as a stay-at-home mother. I loved what I was doing, but it was hard, physically and emotionally. I found great support in a women’s Bible study at a local church.

In this Bible study, I learned about the exciting events of the early church; miracles, shipwrecks, foreign cultures. But I was bound to the daily grind of diapers, bottles, and temper tantrums. I felt that my gifts were meant for more than managing the bodily functions of two active boys.

I recall a specific moment, rocking my colicky son, gazing longingly out the window, I thought, “Surely God, I’m meant for more that this?” And in that moment, God gave me no such assurance.

“Actually Lisa, you are meant for exactly this, at this time. This IS your mission field.”

Not what I was hoping to hear, but an idea that has been a significant motivation for how I do, what I do.

In monastic communities, there is a person selected to fill the role of “Cellarer.” The cellarer is in charge of the storeroom (cellarium), and is called to a wide range of responsibilities, including the distribution of goods, and the care of kitchen vessels and other ordinary items. Although having a rather boring role to fulfill, the cellarer has always been highly esteemed in monastic communities. In the Rule of St. Benedict, the cellarer is charged to “look upon all the vessels and good of the monastery as though they were the consecrated vessels of the altar.”

I like this idea, even the most ordinary objects of the monastery are to be treated in the same fashion as the sacred altar objects. This is something I can imitate. Every diaper changed, every dish washed, every memo sent, or spreadsheet created … every boring, mundane act, can be performed as a sacred act of worship.

Most of us are not called to a life in a far away, exotic place. Most of us are called right where we are, in the middle of the mundane, everyday life we’re leading. And like the Benedictine cellarer, we can enter the mystery of the Quotidian, and see the redemption of all things, even our daily tasks.